CINOGY is the first manufacturer in the world to have received a Declaration of Conformity pursuant to a valid EU directive for its devices for the promotion of wound healing and germ reduction. It sounds complicated, but it has a very simple effect: PlasmaDerm technology is officially recognised, effective and safe. It produces a tissue-compatible physical plasma that is no hotter than body temperature. This makes it perfect for eliminating germs from microbially contaminated skin and wounds. The simultaneous deep stimulation of the skin or wound area boosts microcirculation. The supply of oxygen and nutrients to the wound is improved – helping it to heal better and more quickly.

How does the di_CAP principle work?

The only technology of its kind in the world

Decades of research, hundreds of patents, the German Innovation Award 2019 – di_CAP is the only mode of action in the world that creates cold plasma directly on the skin using ambient air. No additional gases need to be used – the skin becomes a counterpole and thus automatically becomes part of the treatment. This results in a unique deep-acting effect that significantly benefits patients and carers. 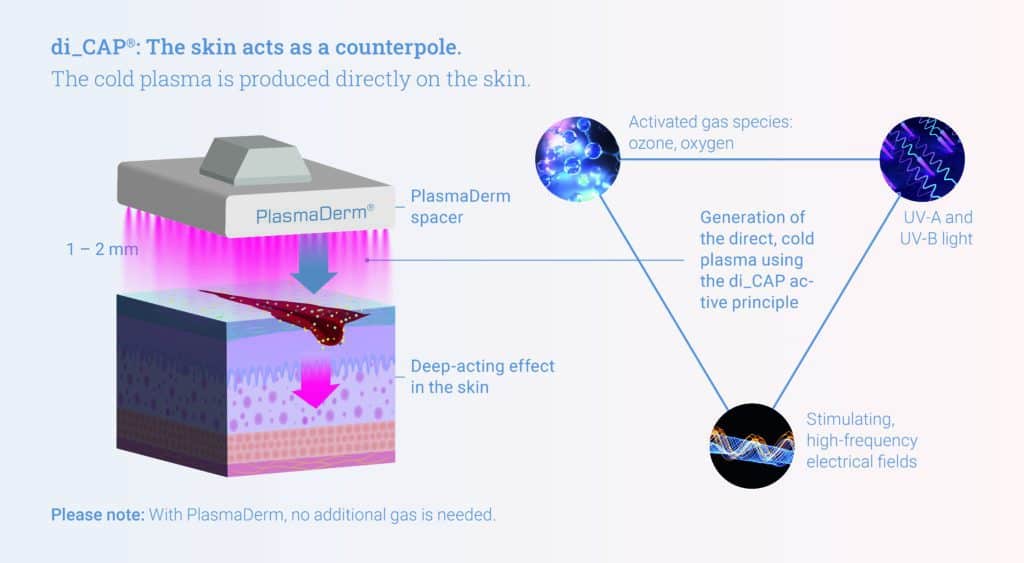 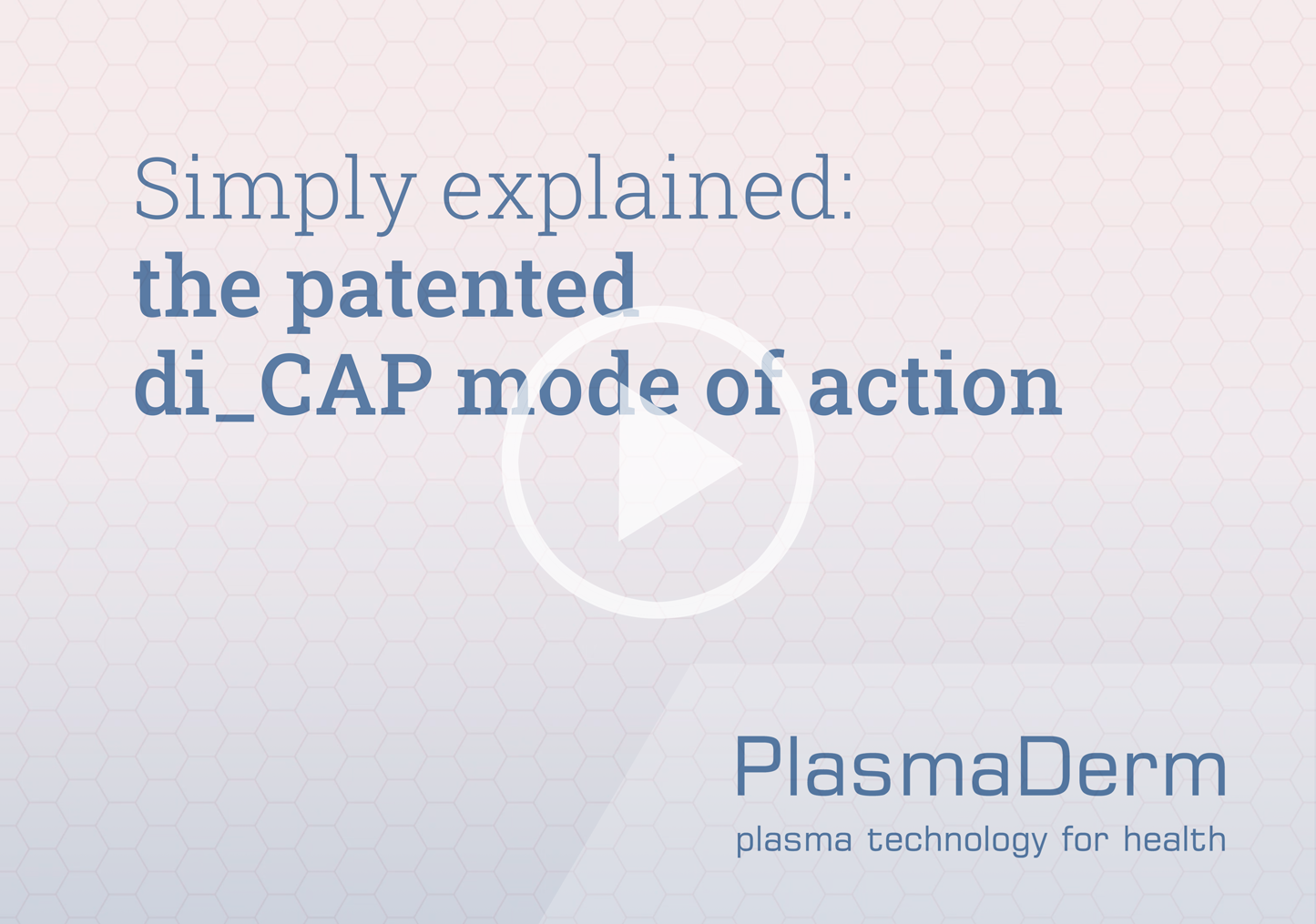 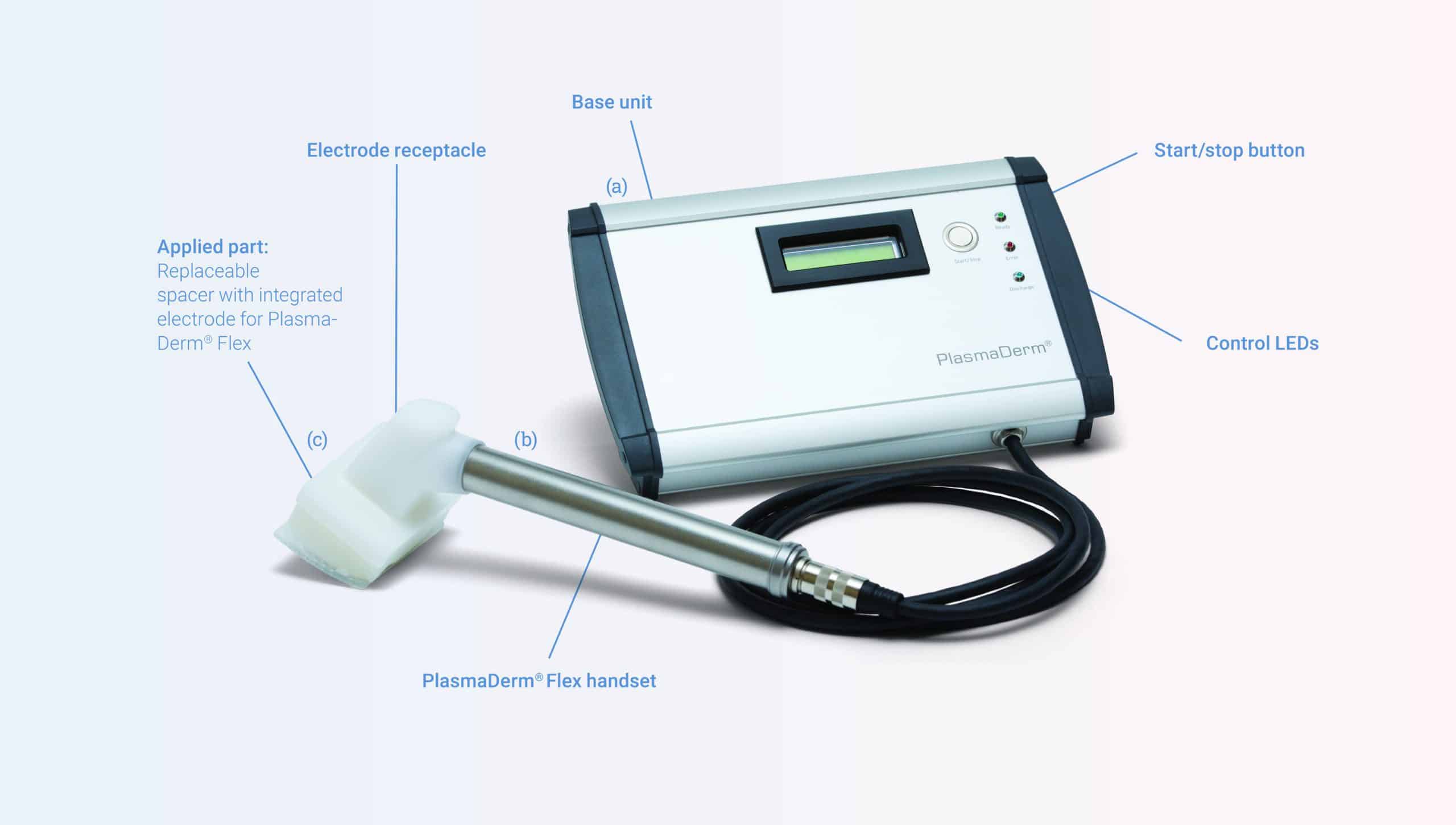 What makes PlasmaDerm so special as a direct plasma source?

The di_CAP active principle is based on a dielectric barrier gas discharge. PlasmaDerm consists of an base unit (a) with a connected handset (b) and the replaceable spacers with integrated electrode (c). Discharge only occurs when the spacer is resting on the surface that is to be treated. The PlasmaDerm spacers provide the necessary distance

and gas gap between the device and the tissue being treated. The plasma generated in this way has a dual effect: the surface effect of the reactive gas type and the very low level of UV radiation and the deep-acting effect resulting from the electrical fields.

Easy to use. Doubly effective.

The electrical fields created during treatment with PlasmaDerm are not at all harmful to patients, and perceptible. However, the effects are enormous: The microcirculation is proven to be activated by the plasma generation and lasts beyond the period of treatment.

Microorganisms are destroyed using a combination of ultraviolet radiation, which is not dangerous to humans, and ozone. Multi-drug resistant bacteria and other germs are eliminated in a highly-effective manner. After only 30 seconds of application time, the treated skin area is practically germ-free.

One thing leads to another

The improved microcirculation in combination with the reactive gas species leads to improved oxygen saturation in the tissue. This improves the supply of nutrients to the tissue. Excess tissue fluid is removed more quickly.

In addition, treatment with PlasmaDerm provides other beneficial effects.

The effects of PlasmaDerm at a glance:

Well over a thousand scientific publications have already verified the efficacy of treatment using cold plasma. Studies and countless application observations with our own device also prove the amazing effects of our unique technology: treatment with PlasmaDerm is verified as being highly effective and practically free of side effects, etc. An overview of the most important findings – all the other information can be found in the respective studies.

Simple and highly effective – even at home. The unique treatment with cold plasma is now possible for everyone. Following a short briefing by the doctor, you can take the respective PlasmaDerm device home with you – and apply it there yourself with ease. We are happy to provide you  with information.

Treat all patients in the best possible way. See for yourself the fascinating effect of PlasmaDerm: Be among the first to equip your practice and clinic with our highly innovative, effective and safe technology. We are looking forward to impressing you and your patients.

Plasma as the fourth state of matter

Many are primarily aware of physical plasma from the medical field, in which it is used in its “hot” form, for example in tissue separation or vessel sclerotherapy. Cold plasma, in contrast, is much less well known.

In short, any kind of gas can become cold plasma, simply by its molecular connection being changed as a result of energy input. This is why plasma is created in all storms, for example. The northern lights are also plasma. Almost 99% of the visible matter in the universe consists of plasma. Scientists also call it the 4th state of matter in addition to solid, liquid and gaseous.

We look forward to hearing from you!

Do you have questions about PlasmaDerm, its application options, possible cost coverage by your health insurer and more? You can find many answers directly in our FAQs. You are also welcome to use the contact form: We will get in touch with you personally shortly!